Clementine and myself attended a march yesterday organized by “Protection Pitbull” in Montreal, a gathering to recognize the importance of coming together, nonhuman and human animals, to publicly demonstrate the love and solidarity shared between pitbull-tytpe dog’s and humans.

The next gathering is set for September 26th, the same day that the mayor of Montreal, Denis Coderre a true maverick in his thinking, will inform us about the “dangerous dog” legislation that is in fact coded for pitbull-type dogs, breed specific legislation.

The more and more we learn about this legislation it becomes painfully obvious that this is as much about proliferating the stereotype of pitbull-type/looking dogs as it is about “cleansing” the image of those who own pitbull’s. A lot of people are questioning why Quebec is mirroring Ontario’s BSL law’s, however, there are important distinctions that are being hushed. Through all of this I am being made incredibly conscious of my social location as a companion and as a lover to “pitbull-type” dogs.

The proposed legislation is a classist and racist in that it is making it incredibly challenging for people of lower economical status, for folks with criminal records (significantly people of colour are criminalized for literally commonplace ‘crimes’ white folks get away with all the time…), for folks who rent who will have to face: move or get rid of their companion animal, for folks who cannot have their mobility restricted to the extent that they are about to impose. For street folks who will have their companions ripped from their arms, regardless of how much love and care they provide. There is so much going on here.

The state protecting it’s citizens may be one of the funniest things they try to uphold, but anyone with a political bone in their body should see how this legislation is MUCH MORE than “just the dogs”. Everything is intwined and feeds into eachother.

I have been trying to focus on all of these other angle’s to get people’s interests and to distract myself from all of the death sentences. Ultimately it is the dogs lives that are on the table – and their lives are based on their associations, whether belonging to families with the ability to spend this money and fit the “proper owner code”; belonging to families who desperately want to, but cannot “meet the requirements” or those who are in shelters. These dogs already have so many forces against them, deemed “trash” by many shelters and people, and now they are going to face even more challenges to the point where FEW will make it out alive. And that is what this legislation is about. Annihilating a “type-looking” dog, not even breed.

Yesterday by coming together in this march we “proudly procmaim[ed] [our] ownership and appearing with their dogs, these owners actively work to promote a different view of both ends of the leash”. This little tidbit comes from a MA thesis completed by Sarah Goss entitled Both ends of the leash: Pitbull ownership and activism in Atlanta, Georgia (2015). Yet I still feel uncomfortable about cleaning up the image of these dogs leash holders to somehow secure their lives. And propagating “acceptable” representations of animal companions; to love and care for them is all one needs to ask. It reminds me of the argument going around of how we need to get pitbull-type dogs into police canine programs. It seems antithetical in the long run. Their reputation’s are not as bad as we think, it is the media that holds the greatest leash in in driving this human-made hysteria. 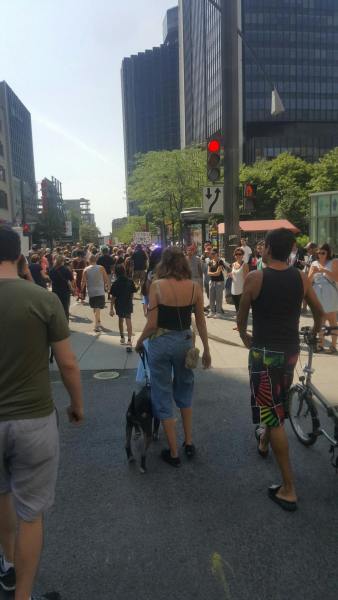